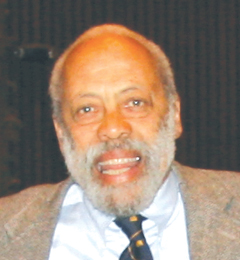 William R. “Russ” Ellis spent 20 years teaching sociology in Berkeley’s School of Architecture before he was tapped to navigate the sociology of the university itself as Cal’s vice chancellor for undergraduate student affairs.

Ellis says one of his proudest achievements is his work with colleague Maryellen Himmel to develop the Incentive Awards program that helps give talented low-income kids better access to UC Berkeley. He himself carved a path through the challenges of poverty and racism to emerge as a groundbreaking academic. The Great Depression and then World War II crashed down on his boyhood. At age five, his mom took off for New York and his dad went to war, leaving him with church friends in Fontana, California. In the shadow of the San Bernardino Mountains, the family grew or raised everything they ate. Ellis’s father returned seven years later and brought Russell home to the Southeast side of Los Angeles. Ellis ran track at Compton High School, earning a four-year scholarship to UCLA where he ran the 400-meter. He missed the 1956 Olympics by a spot.

After getting his Ph.D. in sociology at UCLA, teaching at Pitzer in the Claremont Colleges and at an alternative college in New York’s SUNY system, Ellis came to Cal. He taught about social and cultural issues related to architecture and urban design and garnered acclaim as a teacher and innovator. While vice chancellor, he made a gift of property to the university, a lot in Riverside that his parents had purchased in 1947 after seeing an advertisement in the Los Angeles Sentinel.

The proceeds went to several programs close to Ellis’s heart, including the Regional Oral History Office where Ellis instigated an effort to interview African American faculty members. The project has led to oral histories with Norvel Smith, the first African American vice chancellor in the UC system, mathematics professor David Blackwell, and many others. Ellis’s gift also supported the Young Musicians Program (YMP) that gives access to high-quality music education at UC Berkeley to low-income children from around the Bay Area. He served on the Young Musician’s Board and, while vice chancellor, worked with Chancellor Chang-Lin Tien to restructure the program so that it could become a permanent part of the university.

“I remember thinking, ‘What’s going to outlast me — that’s worth something?’” says Russell Ellis. “UC Berkeley is worth it.”

Now living on the fixed income of a professor emeritus, Ellis is philosophical about the property gift he made to Cal, and glad he did it when he could. “I remember thinking, ‘What’s going to outlast me — that’s worth something?’” he says. “UC Berkeley is worth it.”