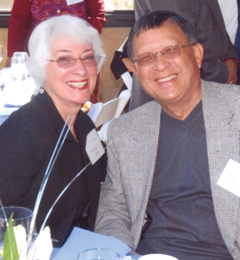 Kwei Ü likes to say he grew up at UC Berkeley’s International House.

Kwei Ü likes to say he grew up at UC Berkeley’s International House. The retired neurologist was just 16 years old when he came from Hong Kong to Berkeley in 1961, but immediately he felt at home because his father and several of his aunts and uncles were alumni who had lived at I-House. “I-House never wanted freshmen, but my aunt threw her weight around and got me in,” laughs Kwei, whose aunt Djoh-I Li was among the earliest residents of I-House, the coeducational housing complex for international and American students established in 1930. Only reluctantly did Kwei leave Berkeley in 1965 to attend medical school in Madison, Wisconsin. “Everyone said, ‘You’ll love Madison. It’s just like Berkeley,’” he recalls. “It’s not. There’s no place like Berkeley.”

After completing medical school, Kwei was drawn back to the Bay Area where he met his future wife, Michele, a nurse in the open-heart surgery unit at the former Pacific Presbyterian Hospital (now part of California Pacific Medical Center). “He asked me to go kite flying and I thought he was joking,” says Michele about her first date with Kwei. Sure enough, the dashing young doctor showed up with a kite to fly on San Francisco’s Marina Green.

Their first baby, a boy named Adrian, was born with a congenital heart disease and did not survive corrective surgery as an infant. “It wasn’t easy, it’s never easy,” says Michele about the loss of her young son. “But it brought us closer.” To honor Adrian’s memory and to express their affection for UC Berkeley’s I-House, the Ü’s gave a gift of property in 2006 and established the Adrian Hao Yin Ü Gateway Fellowship. The earnings from the endowed gift pay for room and board during the academic year for one I-House student who comes from a university in Hong Kong, Taiwan, or China. “We wanted to do something in Adrian’s memory,” says Kwei. The Üs went on to have two healthy children and Kwei became the only Cantonese-speaking neurologist in San Francisco’s Chinatown for nearly 30 years.

“I feel that Berkeley is democratic. It’s not discriminating. It’s not snobbish,” says Kwei Ü, explaining why he and Michele stay supportive, “and yet, it’s tops in everything.”

The Üs revel in their deep family ties to UC Berkeley and continue to strengthen those bonds through philanthropy and volunteerism. Both say they don’t want to be just “names on a list” but prefer to be actively involved with the university. At the same time, Kwei notes that it’s important to keep adding non-English surnames to the Cal honor roll of donors to continue to show the diversity of those who give.

ZhiJuan Gao M.A. ’12 came to UC Berkeley after attending the University of Science and Technology in her native China to pursue a Ph.D. in chemistry. She wanted to come here because Berkeley has “the best chemistry department in the world” — and the best weather. Gao lived at Berkeley’s International House for one academic year, during which time her room and board were paid for by the Adrian Hao Yin Ü Gateway Fellowship from Kwei and Michele Ü. She says life at I-House was “amazing” because of the many social activities and the chance to meet people from around the world. Gao is currently a doctoral candidate at the College of Chemistry and she plans to return to China to do research or to teach. “I want to thank Michele and Kwei for giving me this fellowship,” says Gao. “Like them, I will try my best to help people in need.”