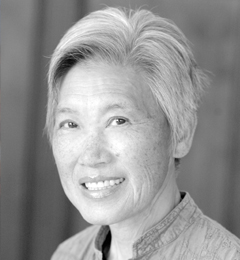 “I had no idea until senior year I had to actually put a needle in someone’s arm,” Joan Lam ’62 recalls with a laugh, “I passed out.”

Lam got something else from Cal — an opportunity to explore her love of music. But she got over that hurdle, completed her B.S. at UC Berkeley’s School of Public Health, and went on to a successful career in clinical laboratory science.“I was walking by Hertz Hall,” she remembers, “and I heard this heavenly sound! It was the University Chorus singing Brahms’ Requiem.” She credits joining the chorus with changing her life — it led to a parallel career in choral performance in venues around the world. “I’ve made wonderful friends through the arts, nationally and internationally,” she explains.

Lam’s giving reflects her broad Cal experience. She established a deferred gift annuity that will eventually benefit the School of Public Health, the Department of Music, and the College of Environmental Design. The annuity provides Lam with income for the rest of her life, and because it was deferred, she was able to postpone her payments until a time when she knew they would do her the most good.

Joan Lam says she feels responsible to the next generation, but it goes beyond that. “Being at Cal,” she says, “taught me how to live. And it showed me that there was so much in the world.”

Other gifts Lam has made allow her to see the immediate impact of her philanthropy. These include a scholarship in the School of Public Health and one in the College of Environmental Design honoring her late cousin, architect Jason Yuen. “I’m big on scholarships,” she admits. For the Department of Music, she replaced 100 copies of the Brahms’ Requiem, and in 2006 another gift established the Joan Lam Choral Library.

Asked why she is such a strong supporter of Berkeley, Lam says she feels responsible to the next generation, but it goes beyond that. “Being at Cal,” she says, “taught me how to live. And it showed me that there was so much in the world.”