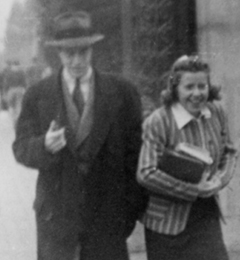 Though Marian Carr Thompson ’42 liked all of her UC Berkeley professors, she confesses, “They scared me to death!”

After a disastrous geology exam, she spent so much time studying in the Bancroft and Morrison Libraries that each became a “home away from home” while she completed her degree in political science and history. Her good study habits paid off, and by her junior year, she joined the Prytanean Society, the first women’s academic honor organization in the United States.

Even for such a dedicated student, “There was always something going on” that she could participate in through her sorority, Alpha Chi Omega — including annual train trips to Los Angeles to watch Cal play football against rivals UCLA and USC. Marian’s years at Cal were especially important because it was there that she met Ken Thompson ’39, her late husband. The two dated at Berkeley and then married the December following her graduation.

Ken, who had earned a degree in accounting, embarked on a career as a CPA and eventually became head partner of Coopers and Lybrand in Oakland (now PricewaterhouseCoopers). Marian worked briefly at the Federal Reserve Bank in San Francisco before devoting her energies to raising a family. (She credits being married to an accountant with the “balanced” birth order of their four children — girl, boy, girl, boy.)

Her charitable remainder trust, like the charitable gift annuity Marian Carr Thompson later funded at Cal, continues to pay her an annual income. “Cal serves us well,” she says, “Ken got his smarts here. I think it’s the greatest! ”

However busy their lives became, Berkeley always remained the couple’s beloved alma mater. The two regularly attended Cal basketball games, and Ken served as president of the Haas School of Business Alumni Club and vice president of the California Alumni Association. They also made gifts to the Haas School, the Class of ’42, the Cal Band, The Bancroft Library, and other programs as well as donating real estate to establish a charitable remainder trust that will eventually benefit Cal. This trust, like the charitable gift annuity Marian later funded at Cal, continues to pay her an annual income.

In recent years, Marian has lost much of her sight through macular degeneration. This setback, however, hasn’t dampened her passion for Cal or prevented her frequent visits to campus. Marian’s commitment to Cal needs no explanation, but when asked, she answers like the True Blue she is: “Cal serves us well. Ken got his smarts here. I think it’s the greatest!”