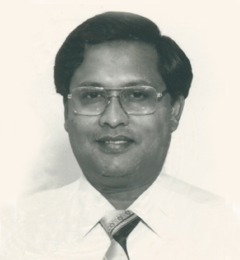 Chat Chatterjee M.S. ’68, Ph.D. ’71 was born and raised in Jamshedpur, India; in 1959, his family moved to Calcutta, where he received a bachelor’s degree in chemistry and both a bachelor’s and a master’s in chemical technology from Calcutta University.

His hard work and training earned him admission to graduate study at Berkeley in chemical engineering, which is how he met his future wife. Having grown up in Mansfield, Illinois, Ellen earned a B.A. in English from the University of Illinois at Urbana-Champaign. She came to San Francisco in 1969 to work, moving into an apartment with her University of Illinois roommate. Her roommate’s husband happened to be a Berkeley graduate student in chemical engineering — and Chat’s lab partner. One day, Ellen was introduced to Chat, and a year later they were married. A year after that, upon Chat’s completion of his Ph.D., the couple relocated to Allentown, Pennsylvania, where he began working at Air Products and Chemicals, Inc.

The Chatterjees have several reasons for wanting to support Berkeley, with which the couple has kept close ties. The first is their appreciation for what the university contributes to society. “Nobody does grad teaching better than the United States,” Chat remarks, “and Berkeley is one of the best of the best.” Another motivation is their personal connection to the university. A third is that it makes “financial sense.” Chat tells how, when he retired, “everybody said, ‘you’re crazy,’” because almost all of the Chatterjees’s assets were in his company’s stock. So Ellen suggested they create a gift annuity at Cal and another at the University of Illinois — planned gifts that would pay them guaranteed annual incomes for life while allowing them to support their alma maters.

The Chatterjees’ life income gifts offer the couple an added measure of financial security, and the peace of mind that comes with it.

Later, Chat and Ellen established at Berkeley a charitable remainder trust, which will pay a flexible income for life, after which the trust’s remaining assets will revert to the university. Besides income and potential growth, the Chatterjees are pleased with the other benefits offered by their life income: no immediate capital gains tax on donated assets; favorable income tax treatment on their income; an income tax charitable deduction; and significant portfolio diversification.

The couple also makes a sizable annual contribution to the chemical engineering department, and their estate plan designates that nearly half of their estate will eventually go to Berkeley. And what do they think about the generous support they are providing for Cal? “We do what little we can,” says Chat, with characteristic humility.