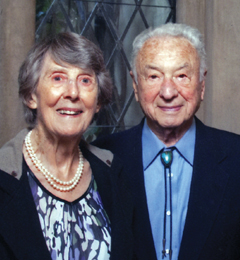 On just his second day of class at Berkeley, Witold Willer ’51, M.Arch. ’52 spotted a fair-haired woman in a room filled with male architecture students.

“Coming from Europe, I couldn’t talk to her because I didn’t know her,” says Wit, a Polish refugee, of his first encounter with the former Norma Pidcock. “So I asked a classmate to introduce us.” Norma Willer ’51 had plenty of male classmates to choose from during those post-World War II days. Reflecting on this gentleman in particular, “I thought he was very cute,” she says.

Wit and Norma dated through school and wed in 1951. And from coordinating the planning and construction of Berkeley’s Lawrence Hall of Science and Tolman Hall to participating in the early development of UC San Diego and UC Irvine, Wit and Norma devoted their careers to a heyday of campus building projects.

Grateful for Berkeley’s contributions to their lives — including the launch of their romance — Wit and Norma are giving back with a planned gift. Their bequest will establish an endowed scholarship that will provide budding architecture students with access to a Berkeley education like the one Wit and Norma received decades ago. Active nonagenarians, the Willers have remained close to Berkeley — living in the same apartment building just three blocks north of campus since 1956.

The new scholarships funded by the Willers’ bequest are “going to help students who have talent get a degree that they otherwise couldn’t afford,” says Wit Willer.

Born and raised in Poland, Wit had two years of engineering education before his studies were interrupted by World War II. Coming to Berkeley in 1947, Wit hoped to finish his degree and start a new life. Because Berkeley’s engineering program was booked with returning GIs, Wit’s adviser suggested he look into architecture. Norma grew up in the nearby industrial city of Richmond. The fourth of five children, she dreamed of being the first in her family to go to college. Norma got her chance after serving in the U.S. Marine Corps Women’s Reserve in World War II and qualifying for the GI Bill.

A rigorous course load gave the couple little time together, and they married as new graduates. A Phi Beta Kappa recipient, Wit went on to earn his master’s — thanks to a $500 scholarship. “It was the difference between going to graduate school and not going,” says Wit.

Through their bequest, the Willers’ connection to campus will remain unbroken. “I don’t think times change,” says Wit, recalling the financial need he and Norma faced paying for their education. The new scholarships are “going to help students who have talent get a degree that they otherwise couldn’t afford.”