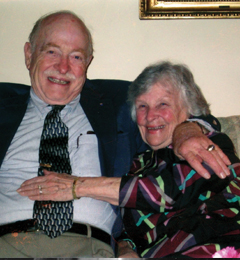 Her family had a country home in Lafayette and she often rode her horse to Hagstrom’s, the area’s only grocery in nearby Walnut Creek. Walt, a clerk there, came outside on a number of occasions to feed her horse. Walt later confided that he’d decided then and there that Alice “was the girl he was going to marry.” Not long after meeting again in Berkeley in 1941 — refilling their respective pens at the old ink fountain outside Stephens Hall — that wish came true.

Though the Nelsons spent most of their adult years in the Midwest and East Coast, they never forgot Berkeley and the defining role it had in their lives. In a demonstration of deep appreciation and generosity, the Nelsons created a bequest that will benefit future generations of Berkeley students. Their planned gift establishes a pair of scholarship funds supporting undergraduates in art practice and engineering, the same majors that Alice and Walt pursued on campus.

An engineering honors student, Walt was himself a Berkeley scholarship recipient. “His whole future could be traced to the wonderful scholarships and deans who supported him in Berkeley,” says Alice. Walt became a leading executive for GE and other companies, where he was instrumental in the development of pioneering technologies such as radar systems, the color TV, mammography, and even coated paper cups that didn’t leak. He also served as president of Talon Zipper, the supplier of zippers that went to the moon. “Those were absolutely marvelous, wonderful years,” says Alice, who was busy tending to their five children.

Through the Nelsons’s bequest creating two endowed scholarship funds, “we felt this would be something carried on by the university for future generations of students,” says Alice.

Known as Alice Betty, Alice grew up in Oakland and followed her parents and three older siblings to Cal. A gifted artist, she studied with professors Oliver Washburn, Eugene Neuhaus, and Chiura Obata. Among many extracurricular activities, Alice served as president of Prytanean and personnel director of the Pelican. After graduation, she continued painting and sculpting when time permitted, earning a B.F.A. in 1968 from Cardinal Stritch University in Milwaukee. She contributed many years of service as a docent and lecturer at the Milwaukee Art Museum. Alice and Walt enjoyed a nearly 67-year marriage until Walt’s death in 2009.

The Nelsons decided long ago that they wanted to give back to Berkeley if they could. Through their bequest creating two endowed scholarship funds, “we felt this would be something carried on by the university for future generations of students,” says Alice.