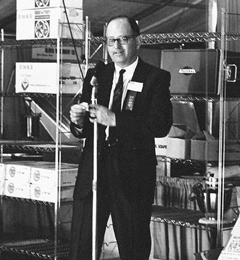 Throughout his life, Warren H. Sichel ’48 learned that sometimes even the best laid plans don’t work out. It was this knowledge that inspired him to plan for his family and to include Berkeley in his estate plan — to guarantee support for two great priorities in his life.

Warren was a first-generation college student whose father, Herbert, instilled in him a passion for education. A lifelong learner, Warren graduated from Berkeley with a degree in business and worked tirelessly in the family’s San Francisco-based company, Sichel Bakery Equipment, for several decades until his death in 1992.

The family business began as a general supply company that Herbert and his brothers purchased in March 1929. With the onset of the Great Depression just a few months later, the brothers shifted from being general supply purveyors to selling baking equipment — no matter how much the economy deteriorated, baking necessities remained in great demand. By the end of the 1930s, Sichel Bakery Equipment was solvent and intent on achieving growth.

Around that time, Warren had enrolled at Berkeley with the encouragement of his father, to study engineering and product management. But then came World War II, and every young, able-bodied employee at the company, including Warren and his cousins, was drafted, forcing the young men to take leaves of absence from their education and the company to make sudden and profound adjustments once again.

During the six years that Warren served, his father wrote constant letters to the military begging for Warren’s release so that he could resume his education. Even the dean of the College of Engineering sent letters advocating for Warren’s return to school, as he was worried that the war’s interruption of young men’s educations would lead to a shortage of engineers. Finally, Warren was released and immediately re-enrolled at Berkeley, pivoting to a business degree, which he earned in 1948.

“My dad was so grateful to his father for keeping the family business open and thriving so that he could join the company after he graduated from Berkeley,” says Elaine Sichel, Warren’s daughter.

“The support of his family and his education at Berkeley paved the way for his success in life and ultimately allowed him to give back to Cal in a really meaningful way.”

Before Warren passed away, he established an estate plan that included a trust to support his wife, Shirley, until her passing. The trust provided income for Shirley for nearly 30 years until her death in 2020, at which point the bulk of Warren’s estate came to Berkeley’s Haas School of Business. That gift enabled Berkeley Haas to establish the Herbert and Warren Sichel Small Business Professorship, which will be offered to a non-tenured faculty member whose research and teaching focuses in the area of small business.

With this meaningful gift, Warren has both honored his father and provided support to others invested in small businesses — helping to train a new generation of entrepreneurs to face the challenges of operating a small business head on, as his family did for so many years.

“My dad was really proud of having gone to college, and of dedicating his life to the family business,” Elaine says. “He understood how much flexibility, patience, and fortitude was involved in running a small business, and for this gift to be realized during COVID — when so many small businesses are in jeopardy — seems to really epitomize my dad’s remarkable foresight.”

Warren also knew from experience that things like knowledge, training, advocacy, and strategic thinking mattered a great deal. He believed that an education at Berkeley could hone and sharpen those skills. “When I think about my father’s life and how sometimes the best laid plans can be upended,” Elaine says, “I can’t help but be proud of how he provided for both me and my mom — and is now contributing to peoples’ education so they can have the same opportunities he did.”