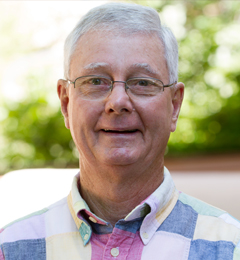 My college education has had a profoundly beneficial effect on my life. If I can help others achieve that, I'm happy.

Though he left the campus back in the late 1960s, Walter Stark Ph.D. ’67 still keeps a part of Berkeley with him. As a doctoral student,Walter collected many of the flyers he’d see around campus promoting local performances by up-and-coming rock bands — and he has several of them on display at his home in Santa Fe, N.M. “I have them framed as a reminder of those times,” says Walter. He also fondly recalls Saturday nights at La Val’s and the passion of campus protests — even when they sometimes made it tough for him to get to the lab to pursue his degree in physical chemistry.
Having held onto those flyers and memories, today Walter is giving a bit of himself back to Cal. Now retired after a long career as a materials scientist at the Los Alamos and national laboratories, he’s chosen to support Berkeley — as well as his two other alma maters, Princeton University and the University of New Mexico.

It used to be that a high school diploma would pave the way to success, but the world is more complex now. You need to know the world more deeply, and I believe that’s what you get at the undergraduate level today.

Walter’s gift to Cal supports both undergraduate scholarships and the highest priorities for the College of Chemistry. It is the result of creating a charitable remainder trust, which not only strengthens Berkeley but also provides Walter with a regular source of retirement income. To him, it’s a win-win situation, with the campus and its brightest minds most of all. “Berkeley was a wonderful place to be, particularly in the sciences,” he says fondly. “I enjoyed it immensely, and that degree opened many doors for me."