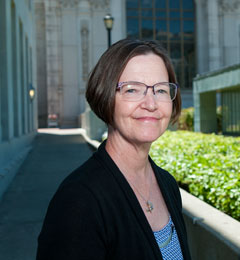 A family’s winding roads point to Cal — and beyond

While Sharon Sandeen ’80, LL.M. ’02 would eventually graduate with two Berkeley degrees, her choice in high school to study clarinet — in lieu of a Spanish course required for Berkeley admission — was her first step on a circuitous path to Cal. Instead, she started college at Cal State Hayward and transferred to Berkeley, graduating with a major in political science. She went on to law school at the University of the Pacific’s McGeorge School of Law, later returning to Berkeley for her master’s of law (LL.M.). She’s a first-generation college graduate, but her Cal story — and her family’s — hardly ends there.

Sharon’s aunt, Emi Yabe, was a student at UCLA when Pearl Harbor was attacked; of Japanese descent, she was sent to an internment camp in Wyoming. But Emi didn’t let that dissuade her from finishing her degree: she eventually returned to California, settling in the Bay Area and graduating from Berkeley in 1950. “I never remember her talking about college as I was growing up,” says Sharon. “When I started finding out about her story, I was extremely proud of her, having the courage to go back to school after that experience.”

Farther up the family tree, Sharon’s niece, Marisa Compesi, had applied to Berkeley and wasn’t accepted — at first. She started college at UC Irvine, and excelled there. Not only was she able to transfer to Berkeley, in her junior year at Cal she was nominated to become a member of Phi Beta Kappa, an honorary society acknowledging exceptional academic achievement. She graduated in 2007, following her aunt into the field of law. Sharon looked back at these experiences and saw that, while all transfer students have their own stories, Berkeley runs in her family.

Now Sharon is honoring these stories with a gift in her will acknowledging the many roads that talented, hard-working women travel on their way to Cal. She’s created the Yabe Sandeen Compesi Scholarship — naming three generations of Cal women who graduated with degrees from the College of Letters & Science — to support scholarships for transfer students. It’s a commitment she’s planned on making for a long time.

Being able to go to Berkeley is a gift — period. But having a circumstance that prevents you from going the first time, and then being able to transfer, is truly a gift.

As an undergraduate, Sharon worked in the library at the law school. “I used to hang out there and just dream — ‘maybe this is something I can do someday.’” She worked her way through college, taking on odd jobs and working for political campaigns. After graduation, working fulltime in the state capitol, she earned her law degree taking classes at night, and built a career as a practicing attorney. Then, 15 years ago, she set her sights on becoming a law professor.

Pursuing her interest in intellectual property law, Sharon discovered that Berkeley had a unique international master’s program that allowed her to focus on law and technology. Returning to Berkeley, her affinity for the university was renewed. Echoing the University of California’s motto — Fiat Lux, “Let there be light” — Sharon’s personal motto is that “we shouldn’t lock down information too much.” Sharon is an expert on trade secret law. An emerging area of study when she did her master’s work, trade secret law is now a robust field that Sharon has played a significant role in shaping. Her work navigates the tension between securing products of the mind as property, and the act of sharing information — an objective about which she feels strongly. “If you look at our society, our investment in public education, public libraries, Internet access,” she says, “that is all about sharing information.”

Supporting access to the highest quality public education for students who seek it — no matter where they are in their college career — is at the core of Sharon’s motivation to give. “There are thousands of stories of why people transfer,” says Sharon. A gift from her trust acknowledges the true variety of these stories, paying tribute to the hard-working women in her family who transferred to Berkeley — and helping to pave the way for future transfer students. Sharon may not play the clarinet today, but she’s happy that her winding road brought her to Berkeley. “I feel good about supporting Berkeley because it’s meant so much to me,” she says. And that’s information worth sharing.