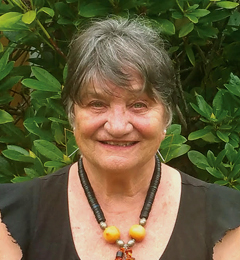 Berkeley still represents the ideals that I value. I want to help it stay accessible — and one of a kind.

An art lover and native Southern Californian, Nancy Staw Talcott ’64, C.Sing ’66 found herself first drawn to Berkeley by her aunt and uncle. “She was an artist, and he was an architect,” Nancy recalls, “and I was always interested in the arts. When I came to Berkeley, I loved that it was a reflection of the real world as I saw it.” She enjoyed music concerts at Hertz Hall, as well as the campus’s lively exchange of ideas in the 1960s. After earning her bachelor’s degree and hitchhiking through Europe, she returned to Cal and earned a teaching credential in art. “I was a junior high teacher for one year, and then I decided that I’d rather be making art,” she says.

And she’s done just that ever since. Devoting herself to making “art that I could make money with,” Nancy created sculpture-like toys and stuffed animals that were sold at I. Magnin, the Nut Tree, and at museum stores. She’s also a painter, often drawing inspiration from her surroundings in Berkeley, where she resides just a mile from where she lived as a Cal undergraduate. A veteran world traveler, she’s spent lots of time in Guatemala, working with local families to improve their lives.

Recently, Nancy and her husband, Rick, strengthened their connection to campus by creating a charitable remainder trust to support Cal students in the arts and in anthropology.

When I was a student, tuition was $62.50 a semester. Now that I have the ability to donate to causes that are meaningful to me, it’s time to give back.

As an artist, Nancy appreciates those who make things with their hands — so her hands-on approach to helping Cal isn’t all that surprising. “Berkeley still represents the ideals that I value,” she says. “I want to help it stay accessible — and one of a kind.”