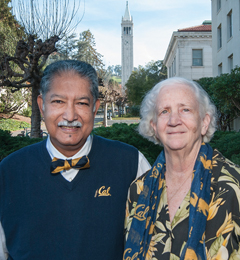 The year was 1967, and the Cal Bears were playing a close game against the Michigan Wolverines. Nadesan Permaul '72, M.A. '73, Ph.D. '90 - an incoming freshman who'd been awarded a Cal Alumni Association (CAA) Leadership Scholarship - sat in the rooting section, consumed by Cal spirit. From Oski stoking the crowd to the Cal Band bursting from the north tunnel, Nad was riveted.  He'd found home. Fifty years later, he is still here, and his contributions as a UC Berkeley administrator, faculty member, and steward of traditions have left an indelible mark on the university.

To honor this half-century milestone, Nad and his wife, Linda '72, have made a generous estate gift to support three programs close to their hearts; CAA's Achievement Award Program, the Order of the Golden Bear (OGB), and the Cal Band.

The university has made my life possible, and I benefited from generous individuals who lived and died before I was a student,

says Nad, who was CAA president from 2003-5. "My wife and I can do no less. It's part and parcel of the public trust."  The Nadesan and Linda Permaul Achievement Award at CAA will help low-income, high achieving undergraduates.

Nad, who's been teaching in the departments of rhetoric, sociology, and political science for 25 years, met Linda when they were undergrads. Both were avid football fans and shared many dates at California Memorial Stadium - before and after they married. Linda earned a degree in mathematics and taught at an at-risk high school in Richmond for 35 years. Why there? "Those students deserve to have a good teacher," she says. "I used to tell them, 'If society thinks you can do math, they think you can do anything." Meanwhile, Nad worked his way up the ranks as a UC Berkeley administrator - from manager of recreational sports and director of parking and transportation to director of the ASUC. In between, they raised their son, Kiran '14.

The Permauls' alumni spirit radiates, right down to Nad's blue-and-gold bow tie and Linda's Cal Bears scarf. They're active members of CAA and have been cohosting summer Cal Discovery courses around the world since 2001.  On campus, Nad has also been an effective bridge-builder between administration and students. He sponsors a student DeCal course titled "History, Spirit, and Traditions of Cal," was the first staff advisor to the Oski Committee, and spent a decade as alumni secretary of the Order of the Golden Bear. This fellowship of Cal students, faculty, and alumni was established by Benjamin Ide Wheeler in 1900.

"It's the oldest free speech forum on the Berkeley campus," says Nad, who joined the order in 1975. "Here we can openly discuss important issues without politics or titles getting in the way. It's a valuable institution to maintain." But as traditions go, says Nad, nothing beats the Cal Band. It's the quintessence of Berkeley, right down to its independence.

"Most alums don't realize that Cal Band is largely self-funded," says Nad, whose son played trumpet in the band for four years. "Our gift will ensure this iconic tradition is supported long after we're gone."

As for the 1967 football game that marked the first day of the rest of Nad's life? "Cal made the winning touchdown in the fourth quarter. It was beautiful."