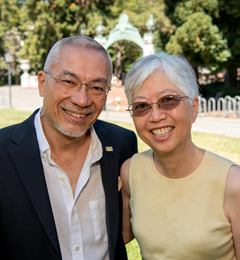 It was the late '90s, and Mike — who earned a degree in chemical engineering — was invited to a talk hosted by the College of Chemistry. He'd been away for 20 years, so he thought, "Why not?"

"I ran into my old professor there, John Newman," recalls Mike, who also holds an M.B.A. from Golden Gate University. "When he saw me, he said, 'What took you so long to come back!?'" Laughing, Mike admits he doesn't recall the topic: "Chemistry lectures can he really esoteric!"

But what he — and his wife, Ruth — do remember is the party they attended shortly thereafter. Sponsored by the College of Natural Resources (CNR), it was hosted by Sandra '67 and Bernard Magnussen at their home on the Peninsula, located in the Chengs' neighborhood. Though Mike and Ruth has no connections to CNR at the time, they received an event invitation. Ruth, who earned a B.S. in economics, recalls thinking, "I drive by this home all the time! I wonder what it looks like inside?" And Mike, always game for a good party, thought, "Why not!"

For the Chengs, that receptions — which honored graduates from CNR's summer-based Beahrs Environmental Leadership Program — set off a chain reaction of service and philanthropy to Cal that coalesced with a generous new gift to CNR and the College of Chemistry through a charitable remainder trust. The gift will not only benefit Cal, it will also provide the Chengs with income as well as an immediate income tax charitable deduction.

"Mike and Ruth have been terrific partners," says CNR Dean David Ackerly. "Their gift is another testament to their commitment to our students and programs."

Mike, who today guest lectures in both colleges and sits on CNR's advisory board, says,

The value of giving to Berkeley is that it gives back. I get intellectual stimulation and hopefully make society a better place in the futures. You don't always have to give money. You can also give time and your experience.

And that's exactly what the Chengs are doing. Inspired by the people they met at the Magnussen party, the Chengs now annually sponsor a fellow accepted into the Beahrs program. Mike, who retired from a successful career in the high-tech industry, also teaches corporate social responsibility courses in the Beahrs program and CNR's Master of Development Practice program. Equally active in the College of Chemistry, he holds office hours for students and is working to create two professional development programs: one for industry professionals and another to prepare undergraduate students for the workforce once they earn their degrees.

"Our alumni play an invaluable role in the college," says College of Chemistry Dean Douglas Clark. "Mike and Ruth's support is enabling students to make an even greater impact on society after they leave our campus."

The Chengs' bong with Cal runs deep. They first began dating on a dare as sophomores. Ruth, who paid for college via scholarships and campus work-study jobs, was the cafeteria gatekeeper — checking student IDs at mealtime. To Mike, a harried transfer student with a full load of science classes, she was a highlight in his day. Like his dorm roommate, he had a crush on her, but he wasn't sure if she shared his attraction. "She didn't check me out, she checked me in! says Mike, laughing. His roommate, too shy to ask her out, dared Mike to instead. He thought, "Why not?" She said yes, and their futures converged. Today, as they celebrate their fortieth wedding anniversary and the pending birth of their fourth grandchild, they are no less enamored of each other — and their continuing relationship with Cal.

"Our objective is not just giving back, but giving forward," says Mike. Ruth agrees. "We want to make the next generation better than we are."

As for the Magnussen house — and that fateful party? Ruth says, "It was everything I expected and more."