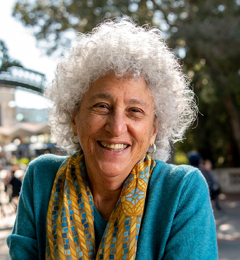 Incisive, cheerful, and energetic, 82-year-old Marion Nestle '59, Ph.D. '68, M.P.H. '86 continues to stretch the definition of "prime of life." A crusader for transparency in the food industry and Paulette Goddard Professor Emerita in the Department of Nutrition at New York University, Marion was recently invited to present a series of lectures at UC Berkeley's Graduate School of Journalism and promote her ninth book, Unsavory Truth: How Food Companies Skew the Science of What We Eat. It's yet another eye-popping exposé of the political and corporate influences that undermine the integrity of nutrition and health research in America.

As Marion stood before a packed huose at Berkeley Engineering's Sibley Auditorium, she was delighted to discover so many familiar faces from her first days at Cal — 65 years ago — including her beloved English 1A teaching assistant, Renata Polt.

“It thrilled me to see her,” says Marion, who earned her B.S. in bacteriology after being drawn to the science end of dietetics. "[Renata's] class was so exciting. It was the McCarthy era, and you were not allowed to discuss dissenting ideas. But we did! It was all about having our own opinions."

Marion, who grew up poor in Los Angeles, chose Cal not only because it was one of the few colleges she could afford to attend — thanks to a merit scholarship and low tuition fees — but also, she says, “because it was the most beautiful place I’d ever seen.”

She went on to earn her Ph.D. in molecular biology during the height of the civil rights and Free Speech movements, and counts her exposure to social activism as foundational to her belief that personal action can effect positive change.

“We had the experience of believing we could change the world,” she says. “And we did.”

But the catapult that launched her career as the leader of the food movement came later, after she earned her master's in nutrition from Berkeley's School of Public Health at the age of 50.

“It was a huge door-opening experience for me,” says Marion, whose trajectory of success was immediate (the Reagan Administration hired her to produce the first and last Surgeon General’s Report on Nutrition). “You simply can’t put a price on the connections I gained from grad school.”

To honor her time at Cal and give promising students the same boost in their educational endeavors she enjoyed, Marion has named Berkeley as a beneficiary of her retirement account to fund two endowments: the Marion Nestle Fellowship Fund in Public Health and the Marion Nestle Scholarship Fund.

“I could never have done what I had if I didn’t have an education,” says Marion. “Cal made it possible for me to have a career. I’d like to give others the same opportunity.”

William Dow, interim dean for the School of Public Health, says, “We are so grateful for Marion's bequest. She is one of our most influential and inspiring alums, and her gift allows us to support the next generation of leaders in public health nutrition."

As Marion closed out her February lectures by encouraging the audience to “Keep making noise!” toward positive change, the room erupted into wild cheers and applause. The loudest came from the students in the back, who lingered afterward to meet her.