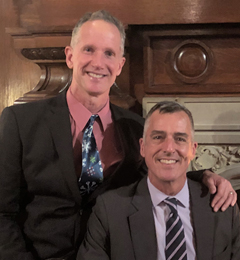 The school is influencing important, innovative policy and I want to support that even when I'm not around anymore.

In midcareer, Jim Maloney M.P.P. '05 wanted to make a bigger difference with his life. Leaving his job in international transportation and logistics, Jim became a graduate student at Berkeley's Goldman School of Public Policy (GSPP). That's where he found his new path. "A friend described the master's in public policy as an M.B.A. for people who want to do good in the world," Jim says. ""I thought, 'If I could get into UC Berkeley, that was like a dream come true.'"

Berkeley lived up to those expectations. Jim felt embraced by GSPP's close-knit community and inspired by professors like former labor secretary Robert Reich. Gaining the tools to address urgent social challenges was empowering.

"Being able to graduate from that program filled me with confidence that I had a voice and could make an impact in the world," he says.

Today, Jim and his husband, Andrew Nance, are doing just that. Jim helps coordinate a running club and restorative justice project for inmates at San Quentin State Prison. He has grown close to a number of inmates,even helping some complete their first marathon — 105 laps around the prison grounds. "These guys give me hope," Jim says. Andrew, meanwhile, teaches school children how to be more focused and empathic as the founder of his award-winning program, Mindful Arts San Francisco.

Grateful for GSPP's role in their trajectories and on the global stage, Jim and Andrew have included the school in their estate plan. "We talked about which organizations in our lives were most meaningful to us," says Jim. "The school is influencing, innovative policy and I want to support that even when I'm not around anymore."