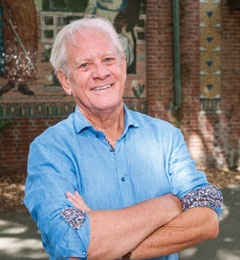 After living in San Diego, where he raised a family and built a career in computer science, James Barter ’68 returned to Berkeley, the city and university he has always considered home. Here he began an exciting second career, honing research skills he developed as an undergraduate studying history and classical languages to write educational books for young adults. His writing covers a wide array of subjects — from the lives of Renaissance artists to the animals of the Galapagos.
Berkeley is a family affair for James. His father earned a Ph.D. in chemistry here, and as a child, James sped through campus on his bike. While at Berkeley High, he wrote papers in the quiet of Doe Library. For college, he never considered another university. Back in Berkeley, James was delighted to find he could be a student again. He audits a course every semester, and recently participated in classics professor Kim Shelton’s graduate student archaeological dig in Mycenae, Greece.
Over the years, James has made consistent gifts to Berkeley. Recognizing that the campus is for him synonymous with home, he recently decided to include Berkeley in his estate plan. James has designated the proceeds from the sale of his house to support several campus areas that inspire him.

A library is the heart and soul of any university. With nearly 12 million volumes, Cal has the fourth largest collection in the nation. My gift to the library is unrestricted so that it can go where it is needed most.

He is also funding undergraduate scholarships to ensure that future generations can participate in Berkeley’s celebrated academic culture.
That culture inspired James to return to Cal and reignite his passion for learning and writing. “I’m leaving my house to Cal to honor my intellectual home and serve the community that welcomed me back with open arms.”