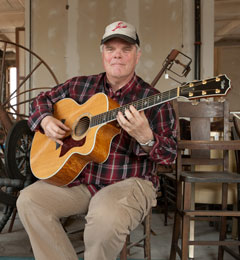 Discovering who you are is part of every college experience, but for Garth Taylor ’71, Berkeley helped set him on a path he would follow for the next 40 years. “Most colleges pride themselves on being able to serve up a good identity challenge,” says Garth. “What puts Berkeley in the elite pool is that the campus and the community provide lots of resources and opportunities for engagement — to step up, put that new identity to work, be who you are.”
For Garth, a bookish, philosophical Midwesterner interested in social change and alternative culture, it would be an educational experience in and out of the classroom. Garth joined the Peace Brigade, a group committed to non violent action, after seeing members form a human barrier between police and a group of angry rock-throwing protestors. He had studied non-violent philosophies, and seeing them actively embodied proved irresistible. He eventually played a leadership role in the group, savoring the feeling that he was learning and doing something at the same time.
Back in class, Garth had an opportunity to analyze an opinion survey on a hot political topic: whether people would vote for or against a referendum to establish community policing boards. Surveys were to be conducted before and after participants spent an evening on the beat with the Berkeley police. He took on the project thinking he might be remotely interested; instead, it pointed to his future. “I could have worked for hundreds of hours on that project,” he said. “I subsequently learned that’s the sign you’re doing the right thing.”
It was a path that took him from a psychology degree at Berkeley to a Ph.D. in sociology at the University of Chicago. He went on to teach at the University of Wisconsin-Madison and at Chicago, but missed the surveying and polling that had drawn him into the field. He took
a position as director of research and planning at the Chicago Urban League, and then a few years later, stepped up to the helm of a new organization created to survey the region. For the next 20 years, he conducted public opinion surveys and quality of life measures as the executive director of the Metro Chicago Information Center.
Garth’s retirement in 2010 set a new chain of events into action. He was an early retiree among his group of friends, and philanthropy was something he would read about — millionaires making jaw-dropping gifts, something other people did — and think, I’m glad that happened. But his view shifted when it came time to plan his own estate. “A lightbulb came on,” he said.

He asked friends which institutions they were planning to support; it was the first they’d thought about it, too. He realized that if he was going to talk about philanthropy, “I needed to lead the way.” “I discovered a need to take responsibility to support the institutions I cared about — to go beyond the notion that someone else would sustain the institutions and activities that were most important in my life.” He continued, “It was a really conscious choice. Every institution I cared about was under financial stress.”
He had planned to make a gift to Cal’s Survey Research Center — then found that it had closed its doors in 2010 due to budget cuts. “To have that gone is a huge loss,” he says. Now he thinks of the institutions he cares about as being a bit like endangered species: if people don’t step up, these places will disappear. He’s made a gift in his will to support undergraduate scholarships at Berkeley in sociology, psychology, and political science. It is important to him that students aren’t left out of the Berkeley experience — and everything it has to offer in shaping their lives — simply because they cannot afford it.
In planning his giving, which also includes the University of Michigan’s Institute for Social Research and a music school he founded in Three Oaks, Michigan, Garth thinks back to his own attitude when he was young and trying to figure out what would come next: “More education will not harm you, and it might actually help.” It’s a mantra that has shaped a life doing work he loves — and that he’s happy to be able to pass on to a new generation.