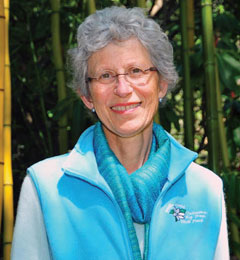 I want to give back to the institution that has invested so much in me. The Garden is a wonderful physical representation of that.

“Nothing nourishes my soul more than a garden,” says Beverlee French ’71, M.L.S. ’73, a native Midwesterner who, before arriving in the Bay Area in the late 1960s, was unaccustomed to the brightly colored blooms that adorn UC’s Botanical Garden.
Beverlee’s connection to the University of California spans more than three decades, beginning with her years as a California Golden Bear. After graduation, she moved south to UC San Diego, becoming one of the early academic librarians at the burgeoning new campus. In the 1980s, she transferred to UC Davis, where she worked for 10 years before being drawn home to the Bay Area by the new California Digital Library initiative at UC’s Office of the President. Beverlee feels an enduring allegiance to the University of California, as well as to the land grant system of public education under which it was founded.
A gift to the Botanical Garden — a world-class treasure — is her way of giving back to the University that launched her life-long career. Beverlee chose to make a bequest to Berkeley because it fit best with her personal goals.

If you are fairly conservative and worry about maintaining sufficient assets during your lifetime, then I think a bequest makes sense.

As a member and long-time supporter of the Garden, she knows firsthand the careful stewardship her gift will receive, and is pleased she can help the Garden continue to flourish for years to come.