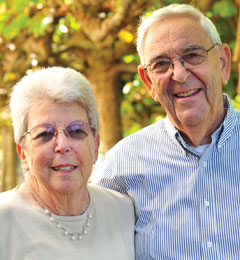 We are concerned about the drastic difference in the student costs today versus the 1950s when we were at Cal. Funding an alumni scholarship is one way we can have a positive effect.

The Breslauers’ family connection to Cal is deep and long, spanning from 1896 to 1986 — with hopes for a fifth-generation Bear in 2024.
At Berkeley, Ardis Breslauer ’57 studied liberal arts and earned a teaching credential, and Al Breslauer ’57 studied engineering and participated in the ROTC. As a young couple, they moved east for Al’s military service. In Washington, D.C. during the 1960s, the Breslauers stayed connected to their Cal family. They gathered with fellow alumni — including Supreme Court Justice Earl Warren — to listen to the Big Game on the radio. They say Cal has given them a leg up in employment and life.
After successful careers — Al’s in engineering and Ardis’s in education and adult literacy — they now travel, spend time with their two children and four grandchildren, and prepare meals for two San Francisco homeless shelters. Al is a docent at the California Academy of Sciences and NASA Ames.

We hold a strong belief in giving back and consider ourselves fortunate to be able to do so in a small way.

The Breslauers’ life-income gift to Berkeley will pay them a modest income for their lives and will one day create an endowed scholarship. They say making this gift was an “easy decision” and one that will help Cal remain a leading and accessible university.