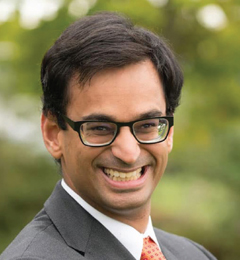 An Eye Toward The Future

Aman Kumar was packing for Harvard Business School when it happened. He recognized the symptoms immediately. In fact, he could literally see them. His retina was in the process of detaching, and if not treated immediately, he would face total vision loss. He was only 25.

Born with a host of vision challenges, Aman had spent several years in high school under the care of Dr. Ian Bailey, a renowned UC Berkeley vision scientist, clinician, and international authority in the field of low vision. Bailey's practical expertise enabled the bright young teenager to better see the world in front of him. But this clarity came with caveats: Aman was at risk of going blind, with retinal detachment the likely culprit. Fortunately, thanks to the guidance he received from Berkeley Optometry, he was prepared.

"I knew the moment it happened," Aman said, who two years prior had completed a master's degree in computer science and artificial intelligence at Stanford University. "I looked up and saw a tiny green spot in the center of my vision, like an afterimage with shimmering concentric circles around it. I went straight to the emergency room."

Aman spent the next eight weeks prone on his stomach with a vitrectomy bubble inserted into his eye to support the retina as it healed back into position. "The doctors told me that if I moved during recovery, the surgical intervention might not be effective," says the bay area native. So he didn't. A model of fortitude, he endured with good humor, a devoted family, and the knowledge that he would receive top-tier aftercare.

"After my surgery, I knew exactly where to go for rehabilitation," says Aman, "and that was Berkeley Optometry." During breaks in between semesters at Harvard, he visited the center for regular follow-up appointments, which included comprehensive and low vision clinics. "It's rare to have such a range of optometric expertise under one roof," he adds.

Today, Aman is considered a visionary leader in the field of enterprise software, which he describes as "bringing the humanities into the sometimes conservative world of building software for business." A senior product marketing manager at Facebook, he also previously helped the Republic of Estonia become the world's first "digital republic" as a special advisor to its government.

"I believe in the vitality of the public good, public education, and preserving a healthy public commons," says Aman, who recognizes these same values in the university.

To honor that sentiment, he included a bequest to Berkeley's School of Optometry in his estate plan. it will support research in binocular vision, low vision, and retinal disease.

But Aman's contribution goes even further. With his technical background and unique understanding of what it means to live with chronic vision problems, he has become a valued advisor at the school as it embarks on a bold agenda to integrate research, patient care, and education as the nation's leader in the field of vision science and optometry.

"Aman has the great ability to help others see the world from a different perspective," says John Flanagan, dean of the School of Optometry. "His wisdom, connections, and affinity for the school are gift in of themselves. I'm looking forward to how he will help guide our goals and strategies in the future."

Aman is thrilled by the possibilities, too.

"I want to hang out with interesting people who are motivated to contribute something to the world. Berkeley exemplifies that. Who knows...I might just end up in academia!"